It’s officially Preptober and I am going to be working on prepping for my NaNoWriMo 2019 project for the whole month of October.

I have a fantasy WIP that I’ve been working on, the same project I did for last year’s NaNoWriMo, but that one’s massive. It has multiple characters, multiple POVs, dragons, sorcerers, war(s), fictional language(s), lore… definitely requires me to create a world map, and I don’t even know how to begin with that… Let’s just say the very thorough outline I’ve been (re)working on for that will definitely not be ready by November.

So, therefore, I’ve decided to revisit an idea that I’ve never drafted before and use that for NaNoWriMo. It’s dark supernatural fantasy with — and this is key — only one main character (YAY!).

I’ve started doing some prep work right at the beginning of October, and here’s a couple of screenshots of my synopsis and outline (using Scrivener): 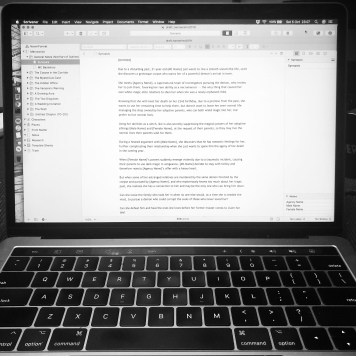 Those are not final at all and I don’t even have a title or any character names. However, I’m excited to plot it for the whole month of October and draft it when November comes.

Can I get 50K words? Even though I was able to accomplish that last year, I’m not as confident this year because my personal circumstances were different. However, I have learned from last year so I guess this year may be smoother and I might actually accomplish it.

Here are the things that I will be preparing based on what I learned from last year:

I feel that drafting will definitely be easier if these things are prepared beforehand. I have a tendency to get off-tangent, thereby ending up with subplots that don’t advance the story. A chapter outline will keep me on track, hopefully. I also spend a lot of time fussing over character names, descriptions, personalities, etc, so preparing them in advance will definitely save me time. The rest are just to help motivate me when the time comes, so they’re not really priority.

Are you planning to join this year’s NaNoWriMo? Will you be preparing for it this month? Do you think my prep list is good enough?

I’ll be sure to give an update on my next post. Thank you for reading!