Indiecember is a reading challenge created by the lovely Megan Tennant in order to motivate people to read indie books and write reviews on them in December. It comes with a bingo board that has 25 labeled squares. For each indie book you review, you can cross out the squares that match it until you fill-up the board in flush style. Or, just cross out a line of squares bingo-style, but for only one matching square per book. Players who win will be able to fill out a form to get entry into a huge giveaway going down in January! For more info, check out megantennant.com/indiecember or her Indiecember YouTube video. 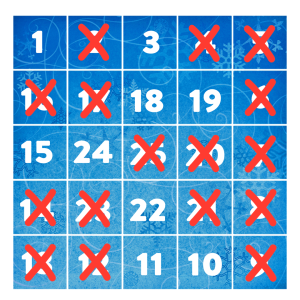 So, what is this Indiecember Writing Tag?

I ended up with 16 unique numbers that I randomly generated (thank you Google, for providing a random number generator) before finally getting a bingo. Whew!

Which of your characters could romance presents out of Santa?

That would have to be a character named Lily who is a healer and a cheerful and nurturing type of person. I imagine she could charm Santa into giving her presents.

No. 16 — CUTTING DOWN CHRISTMAS TREES

Do you edit your manuscript in digital format, or printed out?

For the most part, it will definitely be on my laptop so that means digital.

Is your protagonist naughty or nice? If you have multiple books or protagonists you can do this for multiple.

Even though my protagonist is quite good in black magic, specifically necromancy, she is actually a nice person.

What’s a line or scene that makes you or your readers laugh?

When the main character Claire first meets Zane, the leader of a team of arcane investigators, and also her love interest here, she denies being a necromancer and being a witch in general. But she had already befriended one of his members, who unbeknownst to her, happens to be a ghost. Since ghosts are invisible to non-magical people, Zane is already aware that she is a mage, so she finds herself caught in a lie, and gets a surprise to boot! I don’t know if readers would find that funny but it amuses me.

Beatrice and Christopher, who are caring and loving parents, would probably be the type to enjoy making snow angels. As for characters who would wish to be on a beach instead, probably Trisha, their sixteen-year-old daughter.

Do you have any furry writing companions? Bonus points for showing them on film.

I do not have any pets, and I may not be the right person to have pets, but I do have fluffy cat slippers. 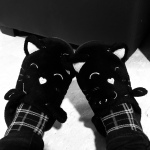 What character would be most likely to use Christmas lights inappropriately. Such as to tie someone up, shock someone, to rig up an explosive, you name it.

There are quite a few of them but if I have to choose, I’ll go with someone named Victoria Aster. She is not a nice person. She is no longer alive though, but is quite significant for the main character’s backstory.

Who is your handiest or craftiest character?

This is tricky because nobody does arts and crafts here. I will probably go with Claire, the main character, because she tries her best to find ways to get things done and may end up thinking outside the box. If I write her well, that is. I am the one who needs to think outside the box!

The main character, Claire, has two dinner scenes with her family and I suppose the better one is the first one where everything is just as per normal and nothing has happened yet. The second time they have dinner together as a family, a demon is with them in disguise, and Claire is a bit tense.

Do you have any writing helpers you’d like to shoutout? Emotional support maybe, or a critique partner. Anyone who helps you from the shadows.

I don’t have that many writer friends around me anymore so I would like to give a shoutout to Megan Tennant and her Kitten Coalition for just allowing me to share writer stuff and interact over on Discord. A huge thank you to Jennifer T. Jarett who took the time to critique my outline. She gave some helpful comments and I’m very grateful for her input. Lastly, thank you to my husband who provided treats for every NaNoWriMo milestone I hit.

Which character was on the naughty list but Santa liked them and took them off?

The closest character who would fit this is probably Zane. Claire, the main character, had a negative impression of Fallen Angels, which Zane is, because her father was a Fallen Angel who was cruel and power-hungry. So even though she is attracted to Zane, she doesn’t trust him. Meanwhile, Zane was disapproving of Claire at first, because, well, she lied about being a witch the first time they met, wasn’t keen on helping his team even though it’s for a good cause, and seemed like she was holding back even when she was helping them. Well, their relationship eventually improves and so Zane can rest comfortably in Santa’s nice list.

No. 17 — THE GRINCH WHO STOLE CHRISTMAS

Which of your characters is most likely to steal cookies and/or gifts from Santa?

The main character Claire used to have twin younger brothers, Anthony and Arthur. They’re no longer alive though, but they were pretty mischievous. 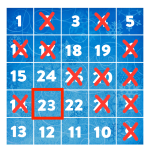 What holidays or traditions exist in your story’s world? If you have too many to list, what’s your favorite?

This would not be a holiday or tradition per se, but my main character’s birthday is a pretty big deal to several people.

How many characters are in the main cast of your most recent WIP or publication?

I have story ideas and a project on hold involving several significant characters, and therefore multiple POVs, but I’m happy to say my current project only has one main character and therefore one POV. It’s quite refreshing for me so I’m a bit proud of myself for that. 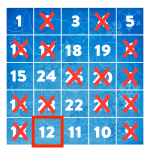 Do you have a logline prepared for when someone asks you about your book or do you run and hide?

I do have a logline, although this is not meant for parties. Well, you tell me. Here it goes, my logline for a project titled Claire of the Corpses:

After discovering a corpse who warns her of a powerful demon’s arrival, 21-year-old Claire Hazelson is forced to step out of her simple but happy non-magical life to return to the dark practice of necromancy to assist the enigmatic Zane Quentin and his team of arcane investigators in hunting the monster, who hints of a connection to her tragic past, before her former master fulfills his decade-old promise and claims her life.

Yup, that’s one loooong sentence that I’m gonna have to improve on at some point.

What music do you listen to while writing?

For my current project, I sometimes listen to ominous, haunting, or sad music to match the tone of my story, which is a dark fantasy story about a necromancer.

Thanks for reading, hope you enjoyed my answers if you actually made it this far! ☺️

(Confession: I answered all the questions! View all of them here, if you really want to…)